I don’t have enough for an additional full part to this series, but some information has been brought to my attention in regard to my findings in the last post and it’s useful enough that I have opted to write this addendum.

In the comments for the first part of this series, and in a followup email to the comments, fellow Retina display hacker Daniel Rozsnyo let me in on a clue regarding the backlight for the 15″ Macbook Retina panel.  The iFixit article notes 48 LEDs are present, which is correct.  But while writing the previous post I attempted to drive the backlight to test my pinout and gave it what I thought was more than sufficient voltage (up to about 35V) and… nothing.  Which made no sense – if indeed there were 48 LEDs, and they were in six sets, then there should have been 8 LEDs in series at 3.2V apiece for 25.6V required.  But nothing happened.

Daniel let me know via email that I was missing one essential piece of information: there are two LEDs in series in each package.  So while there are 48 LEDs, there are actually 96 dice, in series sets of sixteen, not eight.  Daniel sent me the following photo of the LED strip out of his panel, in which you can almost make out two dark spots in some of the devices – and at very least you can see that the white plastic cases are semi-divided in the middle. 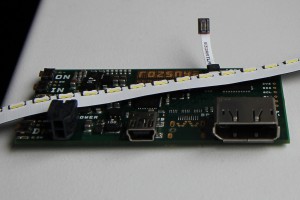 LED strip out of the Macbook Retina panel (in this case the Samsung panel, but they seem to be very similar).

I would never have come up with that without a little prodding, so thanks Daniel.  I have seen devices like these (Nichia and OSRAM make plenty of different models), but never with two series dice before.  The reason for using these unique devices may have been the desire for more even lighting across the display surface.  A reasonable amount of the linear space along the base of the panel is wasted in solder pads and device packaging, so stuffing two LEDs in each package halves the amount of overhead and allows the LEDs to be packed closer together, which reduces backlight banding.

With this new knowledge in hand, I soldered in some jumpers and applied about 46V to one of the strings through a 100R resistor and sure enough, it lit up.  IPS displays like this one are naturally black, however, so that wasn’t very exciting.  I also soldered in jumpers to apply V+ to the LCD controller (which I set at 3.0V, which should be within the range of both 2.5V and 3.3V panels – since remember I don’t know what the proper driving voltage for this panel is), and when V+ is applied, the panel slowly drifts to gray/white.  I am not yet sure whether this is good or bad, but in any case it allows us to look at the backlight dispersion pattern in a bit more detail. 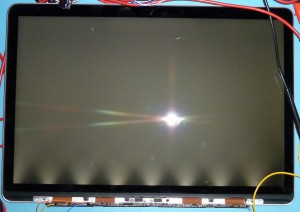 The Macbook Pro Retina LCD assembly, with the panel plus one LED array powered.

I said this at the end of the last post, but I think I mean it this time: This will probably be the last I touch the display until I get my breakout boards in, which should be late next week.  I have contemplated soldering in bunches of tiny magnet wire flyouts and wiring the panel into my iPad test boards, but I don’t want to damage any more than I already have.

Which reminds me: I removed the EM shield frames from the controller, so now you can more easily see all the parts that may have been obscured before.  I also removed all the insulator stickers from the top side, revealing a bunch of labeled testpoints.  Enjoy! (Ignore the jumper wires, eh?)