In the comments for Part 2 of the main series, the desire for a comparatively simple interface board was noted.  From the comments in the original thread and from the Hackaday writeup, a number of people have expressed interest in using the panel as a projector, ala the now defunct LumenLab plans.

Compared to my plans for the full-fledged panel interface, this application is a whole lot simpler.  A large external light source serves as the backlight, so no backlight driver is necessary.  With no backlight, there is no need for generation of voltage rails onboard as the whole unit can be run off a 3.3V input.  And presumably power and brightness control can be handled externally, so no processor is needed onboard.

I had a couple hours free, so I took a swing at generating a board for the DIY projector crowd.  At the suggestion of commenter Joe (and as an exercise to see whether it made the routing any simpler), I this time used a full size DisplayPort connector.  This made the fanout a lot simpler than the mDP I am using on the full-function board, at the expense of some real estate.  But the design remains fairly compact.  It is worth noting that DisplayPort’s pin ordering is different from the iPad FFC.  This means that they cannot be simply wired straight through, and must be routed between layers.  The least troublesome way to do this was to place the FFC on the opposite side of the board to the DP connector – this wouldn’t be ideal for my main controller board, but works here as the tail of the LCD will be held away from the back of the panel anyway. 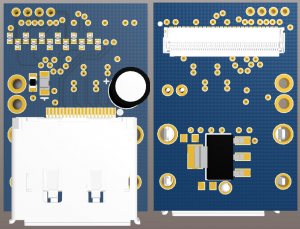 Top and bottom of a simple DP to iPad FFC adapter.  This image does not show the final silkscreen.

Not much magic going on here.  The data lines are straight passthrough from DP to FFC.  The twelve backlight cathodes are connected in two banks of six and brought out to pads, on the off chance that this board might be used with the backlight intact.  To facilitate proper backlight driving, individual 0402 resistors are placed on each of the twelve strings.  Power is diode-ORed between the DisplayPort connector and pads for an external 3.3V adapter, to allow powering from either source without backfeeding to the other; 0603 bypass pads are provided in the event that the diode is not desired or required.  A 5mm electrolytic capacitor is on the output of the diode to stiffen the sources during current peaks.  Finally, a LED indicates the presence of power from either source.  The whole unit comes in at 0.810″x1.175″, barely larger than the DP in width.

So there you have it.  A design for a simple breakout.  You can go ahead and grab the board documents here:

[2013-06-13 UPDATE: The Rev A documents for this board contain an incorrect pinout for the DisplayPort connector, and have been removed.  The Rev B documents which fix this issue are posted in the next part of this series.]

I plan to order one set of these to test and debug in the short term, but beyond that would be more than happy to work with anyone else who might want one.