The mDP and FFC connectors arrived yesterday.  I have some mDP sources and peripherals so I’ve seen the connector plenty before, but when you look at it on its own in your palm, it just looks so small.  And then compared to that, the 0.3mm pitch FFC looks perfectly miniscule. 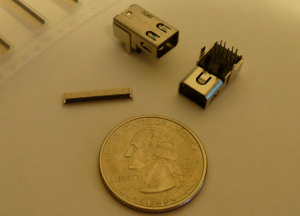 As I mentioned in a previous post, I plan to manufacture these boards through OSH Park.  They have somewhat stricter design rules than my usual board supplier, but they’re also less than 10% of the cost.  The rules at time of this writing stipulate 6 mil trace, 6 mil space, with 13-mil min drill and 7-mil annular ring, and no plated slots.

Here’s the problem.  The pins on a mDP connector are so tightly spaced that it’s hard to route with 6-mil traces, and because plated slots aren’t allowed, an even more roundabout path must be taken for Link 3 to avoid the now necessarily round shielding pads.  I then spent a couple hours figuring out the optimal way to route the signals through the transient suppression diode array, got everything lined up and happily routed on one layer, and went to verify the orientation of the connector to the FFC, and…

Damn.  The pin numbering of the FFC is opposite that of Molex’s numbering for the connector!  Ugh!  Now all of the signals are backward.  And to maintain the desired relative orientation of the board to the FFC to the mDP, I cannot route it on a single layer anymore.  I knew it was too good to be true.

So be it.  The board is still routeable.  Just now there are vias in the high-speed lines, which is generally a no-no.  Well, you do what you gotta do.  Here’s my plan of attack: 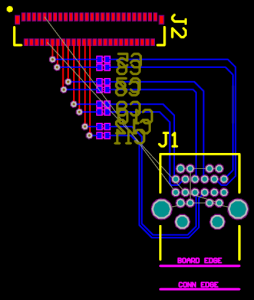 I always start a design this way, by planning out the routes with regular (non-diff-paired, non-length-matched) traces and rough part placement.  Then I start a brand-new PCB and add in the parts and traces for real.  That way I don’t waste so much time with tiny tweaks and shifts, which is easily the most time-consuming and least satisfying part of a design for me.  So nobody write angry comments about mismatched trace lengths or pair separation, okay?

Every step of this process makes me more and more nervous about this design.  The capacitors in the above layout are 0402 size.  The occupied space is about one square inch.  The board will of course be much larger than this once I add the backlight driver, but still… I always have a hard time visualizing just how small a design is until it’s actually in my hand.  And this is easily the most intricate design I’ve yet done (most of what I do is big power stuff), so it should be even more surprising.

The work continues.  Hopefully I will receive the panel within the next couple days and I can get some proper measurements.